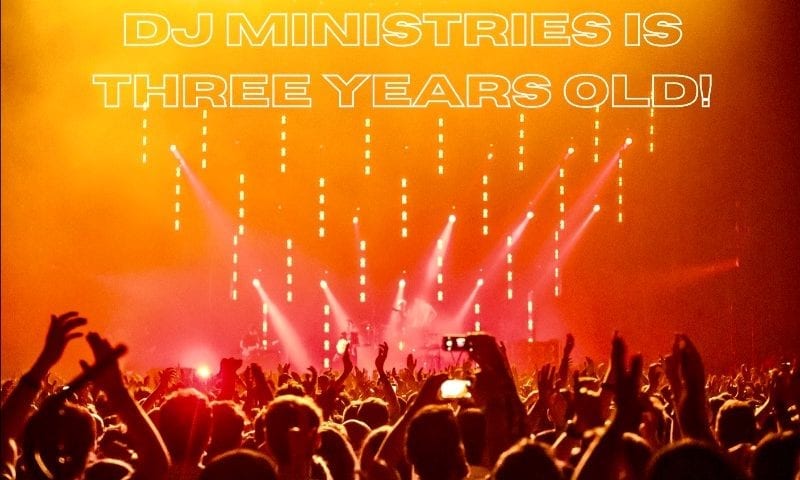 THIS MONTH, THIRD SPACE MINISTRIES CELEBRATES THREE YEARS OF DJ MINISTRY AND ONE YEAR OF SOUNDCHECK! WE HAVE SO MUCH TO BE THANKFUL AND EXCITED FOR.

JOIN OUR DJ MINISTRY COORDINATOR, LUKE ROLLINS, AS HE SHARES HIS REFLECTIONS FROM THE PAST THREE YEARS…

April marked three years since we launched the DJ Ministry branch of Third Space Ministries. Back then, we gathered together in a repurposed commercial premises to launch an initiative with supporters and friends who had journeyed with us long before anything official had been announced. We had met and congregated in houses and spaces for years prior; a small confederation of DJ’s and artists, sharing a love for God and an irresistible sense that something was happening even if we didn’t have the language for it. The DJ Ministry launch night, three years ago, solidified a movement that had become too obvious to ignore.

Three years later, we can turn and reflect upon a journey that took its first official steps that evening and has continued to gain momentum ever since. Initially, the primary focus of the ministry was the nurture and growth of the DJ Unity group; a community of Christian DJ’s and MC’s that had connected over the years. Together, this truly precious and unique fellowship continued to meet to pray, worship and connect in genuine appreciation for the common ground that existed between us. By nature pioneers, fringe thinkers and creatives, the community found great solace, inspiration and support as the connections and friendships grew. As we facilitated the gatherings, we discovered the power of unity and the irresistible excitement that came from this forward thinking collective. It was only a matter of time before we found ourselves stepping beyond the holy huddle and into the outside world.

Our missional adventures with DJ Unity took us to clubs in Hackney where members of the group took over the decks and played music to whoever wanted to listen, all the time looking for opportunities to pray for people, show care for the staff and love those around us. We organized DJ tents at festivals, combining equipment, manpower and technical expertise to put on the best event we could, even in adverse weather conditions. For two consecutive years, a team flew out to Ibiza to pray on an island famed for its contributions to the dance music world. In the second year of this annual pilgrimage, we prayed around every major Ibizan club, speaking blessing and listening to God before meeting together to dance and worship all night in one of those major clubs. Ibiza also offered us the opportunity to DJ at a grass roots worship event, supporting the local churches and communities on the island.

Back in England, we hosted a room at a drum and bass festival in Leicester and dispersed ourselves amongst the crowds, looking for moments to share God’s love with those in attendance. People were healed, encouraged and cared for as the party raged around us.

On a stiflingly hot day in August, we DJ’d outside of Morden Baptist Church as crowds flocked past us on the way to the Eastern Electrics festival, interrupted by the music and volunteers handing out free refreshments and offering prayer. The following year, some of the group chose to join the Festival Angel team inside the festival, offering practical care and support to those in attendance.  Slowly, our community began to expand outside of our traditional London meeting ground, into Scotland, where we hosted two gatherings and began to build on connections in the north of the UK. A group of us met for a creative retreat, huddled together for a week in a freezing cold makeshift studio not far from Gatwick, producing music that explored new sounds of worship and praise.

International relationships began to form as numbers grew, and all the while this dynamic community developed side shoots of prayer meetings, musical collaborations and event ideas.

The onset of the pandemic brought much of this to an abrupt halt. Yet even in a tragic time, when many had lost all forms of income, the community rallied to raise spirits and morale. We organized a virtual festival showcasing the talents of many of our community members and spreading good news far and wide on social media channels in a time of despair and sorrow. Although physically not able to meet during this time, the Unity group continued to connect online each month as we sought to pray for a crumbling nightlife and keep each other buoyed for the journey. With a wider perspective, we arranged a Night of Prayer for the Nightlife and prayed into the early hours for hope, provision and freedom for a traumatized night time community.

During this excitement of facilitating the Unity group, we also found ourselves stirred to explore the potential of chaplaincy to the nightlife industries. As April drew to a close, we celebrated the first year of Soundcheck, a chaplaincy initiative for DJ’s and musicians, that launched in May 2020.

Drawing upon the heart of Third Space for chaplaincy, Soundcheck was designed as a response to the well documented mental health and holistic wellbeing concerns faced by many who work in the music industry. With the impact of the pandemic only exacerbating the needs of individuals, we set out to offer a ministry of listening, caring and supporting those who, even outside of a global health crisis, often have a challenging lifestyle to navigate. Within a few weeks of launch, we were contacted by a music producer who was battling with his mental health and simply needed someone who was prepared to listen without agenda or judgement. That relationship has developed into a fortnightly conversation and a journey of recovery over several months, during which time the individual has experienced a marked and measurable improvement in his wellbeing, perspective and levels of anxiety.

We continue to plan for expansion with the Soundcheck initiative, supporting other individuals remotely and equipping ourselves for further opportunities. At the time of writing, there are three chaplains ready to offer chaplaincy as the need arises, a training day written for future mobilisation and I am completing a certificate in Pioneer Chaplaincy from the Light College. We have experienced incredible support from members of the Unity community who fundraised for the initiative through online events and we look forward to a collaboration at the end of May with MyHouseYourHouse Radio as one of their chosen charities to support as part of their bank holiday online charity event.
It has been a truly remarkable three years. Through witnessing the growth of communities, ideas and initiatives, we’ve known such blessing, favour and grace as various dreams and visions have taken shape and materialised. Considering the future and the challenges that lie ahead, we only have to look back to take heart for what is to come. What God is calling us to pursue may require perseverance and creativity but there is no denying the joy in the journey.